Sweet, glorious vacation! I’ve not properly been on one for almost 6 years but we’re just weeks away from finally going on a trip we’ve wanted to go on for…well, most likely around 6 years now. We’re going to Malta!

END_OF_DOCUMENT_TOKEN_TO_BE_REPLACED

I hate the Oscars. Hate them for being so amazingly out of touch with reality. They’re filled with…I don’t want to call them artsy and mean it as an insult, but I’m not really sure what else to call them.

I’m talking about the movies that you can tell from the trailer is Oscar material. Dramatic, tense, tugging at the heartstrings. These are all hints. Especially if the main character’s spouse died.

These aren’t the movies people love. Okay, I’m sure someone out there loved these movies. But they aren’t the ones people were talking about. And before I get into my list of nominations I want to make it clear that I’m not saying these movies aren’t deserving of awards. I’m saying that the Oscars as they are presented, the highest prestige in Hollywood…they need to be about what’s popular.

The artsy dramas can have their own awards just like Sci-fi.

So with that…I give you my very own Oscar nominations.

END_OF_DOCUMENT_TOKEN_TO_BE_REPLACED

My first day in an MMO was eventful to say the least. In fact this entire story will take place in just the first hour, okay, maybe two if you take character customization into account.

The year was 1999, MMOs were still brand new things. After seeing my then boyfriend playing Everquest I realized that my dream of playing games with other people was about to come true. So I took the 80 miles round trip it took to get to a Best Buy and I got my copy of Everquest. Getting it installed was a breeze but I very quickly hit my first snag. What server do I play on? Making it even more difficult were these strange letters next to the server names. PvE and PvP. What did they mean? I had no idea. For some reason it never crossed my mind to look it up either. Instead I tried to work it out in my head.

The first P well that obviously stands for player, meaning me. That seemed easy enough. I understood the v meant versus as well. But it was those last letters that had me all mixed up. Eventually I thought I had worked it out. After going through dozens of possible words, I knew for a fact the E stood for everyone. That meant I’d be fighting other players! I didn’t want that. So, I quickly rolled up on a PvP server not ever working out what that second P stood for.

It didn’t take me long once I logged in to work out I’d made a terrible mistake. I got attacked by a player. Instead of trying to fight I ran. I kept running until I found a group of people. They happened to be roleplayers though I had no idea what that was at the time. They very swiftly dealt with the person who was chasing me and explained to me where I’d gone wrong. So thank you random roleplaying heroes! I quickly deleted that character and made my very first main character in an MMO, Dystia.

Sadly my time in Everquest was short. When the first expansion was released there was an upgrade to the system requirements and I no longer met them. But I look back on my time in the game fondly. I was even in my first in game wedding with my first friend in an MMO all because I stood under the Wood Elf city and yelled out “Bored girl looking for bored boy.”

This blog post is part 4 in a month long blogging initiative called Blaugust. It was also prepared ahead of time because I’m headed to Gamescom for nearly a week. Though I will make every effort to blog while at Gamescom I’ve prepared enough posts to get through the convention. If you’d to know more about Blaugust head over to the official Anook page.

Yep, it’s one more day of game recommendations and also one more day until we leave for Germany! Why? Because they’re easy and I’ve been busy getting ready to go away for a week.

Previously I talked about my recommendations for the various business models for MMORPGs and a MOBA. This time there will be more games recommended for a variety of different interests.

END_OF_DOCUMENT_TOKEN_TO_BE_REPLACED

Yesterday I actually thought I would get a lot more recommendations in than I did. This has sort of worked in my favor however as I’m writing more than one blog post a day so I don’t have to worry during Gamescom. So if you’re looking for my recommendation on the best subscription based and buy to play MMORPGs head over to yesterday’s blog because we’re moving ahead!

END_OF_DOCUMENT_TOKEN_TO_BE_REPLACED

There’s something I see on Reddit quite often that I usually feel compelled to answer, people asking for tips on which MMO they should play. I feel that my job as Editor in Chief of MMOGames.com puts me in a unique position. I get paid to keep up on the industry, play these games, and give my opinion. With that in mind here are my recommendations for MMOs, MOBAs, and other online games.

END_OF_DOCUMENT_TOKEN_TO_BE_REPLACED

Z for Zachariah is the story of a young girl who is one of the only survivors after a terrible nuclear war. The girl is on her own, with her only companion in life being her dog. That is until a stranger finds her valley. I’m not entirely sure what age I was when I first read it but I know that it is responsible for my love of the post-apocalyptic genre. Why? Because this girl was me. She was just 16 years old in the book, which I’m sure was several years older than I was when I read it. But it was close enough for me to be able to step into her shoes and imagine I was her.

END_OF_DOCUMENT_TOKEN_TO_BE_REPLACED

I haven’t blogged in a while. In fact I thought I was going to give up on blogging all together, but recent events have driven me to the point of needing a good old fashioned rant.

I’m not a sports fan. Hell, I’m not even an eSports fan. MOBAs just confuse me. But there’s an aura around them, something electric that pulls you in even when you have no idea what’s going on. It’s a connection I feel with eSports but not traditional sports, why? Who knows. That isn’t the point.

END_OF_DOCUMENT_TOKEN_TO_BE_REPLACED

Meeting a celebrity is hard. Either you fangirl out at them and you just become another one of the fans or you keep that fangirling to yourself and treat them like a human being and hopefully you can go on to become friends with them. So last week when I was faced with the prospect of meeting one of my favorite people in the gaming industry who had up until that point eluded me by being in California while I was in Ireland I was nervous. I didn’t want to be another fangirl. I didn’t want to geek out and scare him away. I’ve always thought that celebs of any sort need people who just treat them like people. They are after all just people.

Of course developers aren’t celebrities on the same scale as actors but that didn’t keep me from my glee. After watching him online doing broadcasts for City of Heroes I finally got to meet Andy Belford. Thankfully I managed to keep my cool. He even helped us get into the EA behind closed doors area when the people at the front desk had never heard of Dawngate. Seriously, we got asked if we meant to go to the Activision booth by the ladies controlling the front desk. They had never even heard of Dawngate, which I will just point out is most certainly an EA game.

So one of my three missions of Gamescom was a complete success. 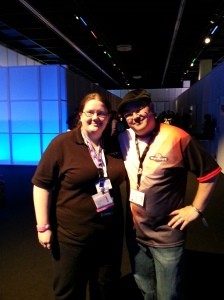 This is me, posting twice in one day as I catch up on Blaugust because of Gamescom.

Gamescom was fantastic. We got home super late last night and I’m still feeling like I could sleep for a week. Sadly Gamescom was just too crazy to try to keep up with blogging. The Wargaming party was what really killed it. We didn’t leave until 2 in the morning. After that I just stopped trying to keep up. But! Now that I’m home you can expect to see lots of thoughts on Gamescom, images, and amusing stories of running into bastards who didn’t see the wheelchair coming straight for them. I might even post an image of all my sweet loot in one place. I got some pretty awesome loot this year.

Be sure to keep looking back at the blog twice a day while I catch up on Blaugust. I may not have been able to keep up while I was gone but I’m not going to fail the challenge.