Within a distance of less than 2km (1.2 miles) there are 13 Starbucks! Thirteen! In one case they are quite literally across the street from each other. I’m not talking about one of them being a Starbucks inside of another store. Both of these are proper, sit down places to get coffee. The employees from one could look out the windows of theirs straight into the windows of the other and wave at the people working the counters at the other one. Basically if each of the Starbucks were lined up on a straight road you would get to one every 470ish feet. In other words imagine if you walked down a street and every third (American sized) building was a Starbucks. That is basically what we’re talking about here. As you can see in the map below which points out the locations of each Starbucks within this small section of the center of Dublin they aren’t all in a row. And in fact they tend to clump together. 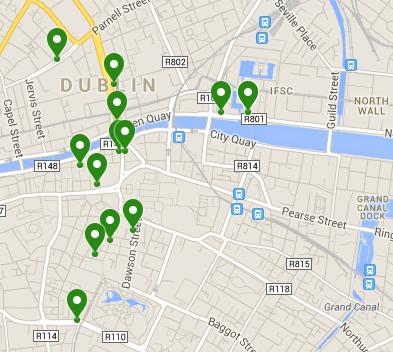 This is something very common in America. How often do you see a McDonald’s without another fast food place on an opposite corner or right next door? There is an entire science dedicated to finding the ideal locations for certain businesses. And while it is a very fascinating subject I object when you end up having several of the same exact brands in such a small area. We do not need thirteen Starbucks within a 20 minute walking distance. We do not need two McDonald’s on O’Connell Street. That being said, I will only go into one of the two McDonald’s. But that is because of the quality of people that go into them and the overall feel of them. One feels much cleaner and safer than the other. There are also two Burger Kings on O’Connell Street but if I’m perfectly honest I have no idea how they both survive as no one ever seems to eat in either of them.

Does Dublin need more cafes/coffee shops? Sure! It has always been a struggle to find somewhere to sit for a few minutes while you wait for a friend. But that need could just as easily be served with local homegrown businesses who bake their own brownies and offer strange and exotic teas from all over the world. Would I be upset about two cafes across the street from each other who serve the exact same things and have the exact same styles but were both independently owned and operated? Not at all! Because this is the type of place that fosters community. The owner/barista will get to know you if you go in regularly, and in turn you will want to go in regularly because they will know your order the moment you walk through the door. You can’t get that with Starbucks. You can’t get that with corporate life in general. You become just another dollar sign as you become a slave to what must be very addictive coffee.

“But the local Mom and Pop cafes can’t make this fancy coffee I like that comes hand ground from a three legged dog in Peru.” No, they can’t. Because they don’t get the income necessary to support that kind of thing. Maybe if that was the only drink they offered they might be able to. But variety is key to a business’ success so limiting themselves like that would be suicide. Basically all I’m saying is support local businesses and Starbucks, GTFO.