Yesterday I actually thought I would get a lot more recommendations in than I did. This has sort of worked in my favor however as I’m writing more than one blog post a day so I don’t have to worry during Gamescom. So if you’re looking for my recommendation on the best subscription based and buy to play MMORPGs head over to yesterday’s blog because we’re moving ahead!

END_OF_DOCUMENT_TOKEN_TO_BE_REPLACED

There’s something I see on Reddit quite often that I usually feel compelled to answer, people asking for tips on which MMO they should play. I feel that my job as Editor in Chief of MMOGames.com puts me in a unique position. I get paid to keep up on the industry, play these games, and give my opinion. With that in mind here are my recommendations for MMOs, MOBAs, and other online games.

END_OF_DOCUMENT_TOKEN_TO_BE_REPLACED

Here I go, still backing out of the idea of blogging about things other than games. This is happening mostly because 1. This idea was given to me by a friend. and 2. I don’t have any other ideas at the moment. My good friend Seph asked me a few days ago about my thoughts on taking an old character with you to a new game. This is really only a roleplayer issue. But it is one I face every time I start playing a new MMO. And of course there are several different ways to do it. So, before I get into my thoughts on the matter lets take a look at the different ways it can be done.

Character Moved To A New City

This is exactly what it sounds like. You keep the exact character you had in a previous game, same personality, same history, same everything. This really only works in modern MMOs as fantasy settings tend to be wildly different from each other and be an entire world. There is often a problem matching up abilities however. Characters often have to learn new skills in this new town because their old ones aren’t available elsewhere. Imagine trying to take an Earth Controller from City of Heroes into The Secret World. You couldn’t. On the other hand though, if you have a beloved character it is good to know they live on even though you don’t play the game where you originally created them.

Maybe you made a really awesome catboy in The Elder Scrolls Online and you want to take him with you to Guild Wars 2. The Charr and Khajiit aren’t exactly the best fit. Yes, they’re both cats but that is about all they have in common. Still, you could make a Charr who is considered particularly odd. In this case, unlike the first one you can cross settings, genres, and all sorts of boundaries with relative ease. The difference between this method and the first is that your character has no history in the old place they’re from. They’re effectively a brand new person like any other you roll up. This is by far the most common way of bringing characters from one game to the next. It is also widely used by non-roleplayers. The people who are Amazonian Babes no matter what game they’re playing. 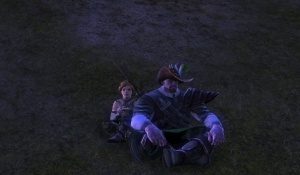 This one is only very slightly different to the one above. But the general idea is that while the character may look the same and have the same name as the previous version they’re a better fit for the lore of the new MMO. This requires that small changes are made to the character to make them fit. Making a Bahmi from Rift into a Norn in Guild Wars 2 for example. Racially speaking they’re sort of close. The big difference is that instead of trying to force your idea into the established world you change your character slightly to make them fit in. A Bahmi turned Norn would be louder and more boastful for example.

Where Do I Fall?

That leaves us with the final question, what are my thoughts on it? Personally, I hate it. In all forms I hate it. As City of Heroes was my favorite MMO it will serve as an example. I once had a friend in CoH who went on to play Champions Online when it launched. He played it as the first type. His character had just moved to a new town. That effectively meant, once City of Heroes went free to play that he could (and did) bounce between the two games on the same characters. This wasn’t too bad. The two games were close enough to each other in a lot of ways that it could be excused. Even though these two were obviously in two different universes. But the whole time I played with this friend I couldn’t help but wonder why he moved his characters from one game to another when he was clearly happy playing them both.

But for me the real issue is with lore. Before I start playing an MMO I dive into wikis, I read up on everything I can so that when it comes time for me to make a character they have a deep connection to the lore of the game. I also never play an MMO I didn’t beta test. I make a character who may or may not make it to live and I get a chance to learn a little bit more about the world that way. So I wouldn’t be able to take my Eth from Rift and put her into ESO as a Redguard. They just wouldn’t work despite the fact that both would be from desert dwelling people and back from the dead.

In the end I suppose the answer is, as with so many views I have, that it is ok for other people to do it but I would never do it myself. Sadly that means that all of my City of Heroes characters are lost to me. I won’t ever play them anywhere else. While that does make me sad, it isn’t something I’m willing to change. Instead I will be happy with the knowledge that they continue on in Paragon City, fighting crime and living life as they always have.

This is day 9 of the Blaugust blogathon! If you don’t already know about it check it out out here.

I realized perhaps three or four Steam sales ago that I just don’t play single player games anymore. The last game I bought that wasn’t an MMO was Guacamelee. It looked adorable and fantastic, so exactly the sort of thing I would enjoy. I never even installed it. That being said though, I am still glad I bought it. Not only am I supporting the art of video game creation but I also bought it on Humble Bundle so my money also went towards charity.

But this got me thinking. Why don’t I play single player games anymore? The answer seemed rather simple actually. I looked at the games I’ve played in the past. Duke Nukem, Civilization, Age of Empires, Warcraft, Legend of Zelda, Harvest Moon, The Sims and others. I realized that they all had one thing in common. When I played them I wasn’t just going through the motions. I was roleplaying in my head. Even as a small child I longed to play games with other people, I just didn’t know it.

That is, until 1999 when I tried out a little game called Everquest. Even in Everquest though, I didn’t quite understand what it was I was looking for. I stood under the Wood Elf city and cried out “Bored girl looking for bored boy…” It continued and I don’t remember the rest anymore sadly. But it was there I met Matthew. At least I think his name was Matthew. It was a long time ago. We eventually got to a point where we would play together all the time. And our characters even got married, as I recall it was actually a GM who performed the ceremony. Sadly time went on and I lost touch with him. Though hey, if you happen to be reading this, mystery Everquest friend, send me a message!

Somewhere between there and finding out MSN had chatrooms I discovered I was a roleplayer. I had always been a roleplayer too. But in these wonderful chat rooms I could roleplay with other people. It wasn’t just acting out something in my head, it was people who were like me, interested in telling a story. I eventually went on to roleplay in City of Heroes and the rest is history.

I suppose what this really all comes down to is that I’ve never played single player games alone. There were always others, though they were invented and only in my head they were there. Today I am happily MMO exclusive. I won’t player shooters or games that make roleplaying difficult or impossible. Does this mean I’m missing out on some great stories? Yeah, most likely. I’m told that The Wolf Among Us is amazing. But, unless I decide to buy it on Steam sometime because it’s really cheap and install it ahead of time to play on the rare occasion of not having internet…I’m never going to play it. I’m missing out, but I’m ok with that.

This entry is Day 6 of the Blaugust blogging initiative. My current goal is to write once a day about gaming for an entire week. This week ends tomorrow. At which point I’ll talk about whatever comes to mind for a few days before we’re off to Gamescom where I imagine it will once again be all gaming.